Docker Swarm is a clustering and scheduling tool for Docker containers. With Docker Swarm, IT administrators and developers can establish and manage a cluster of Docker nodes as a single virtual system. In the context of Swarm, a cluster is a pool of Docker hosts that acts a bit like a single large Docker host. Instead of the hassle of having to decide which host to start every container on, we can tell Swarm to start our containers.

Clustering is an important feature for container technology, because it creates a cooperative group of systems that can provide redundancy, enabling Docker Swarm failover if one or more nodes experience an outage. A Docker Swarm cluster also provides administrators and developers with the ability to add or subtract container iterations as computing demands change.

To enable the Swarm mode, it is essential to install Docker Engine

The following ports must be available. On some systems, these ports are open by default.

1. Run the following command to create a new swarm:

--advertise-addr : flag configures the manager node to publish its address as 192.168.1.172
The nodes joining the swarm must be able to access the manager at the IP address.
The output shows the commands for node machines to the swarm manager.

2. The command for node machines to join the Swarm as seen in the above example is,

3. The docker node ls command will display all the nodes in the swarm

The * next to the node id indicates that you’re currently connected on this node.

Deploying a service to the Docker Swarm

A service is created to deploy an application image when Docker Engine is in swarm mode. A service will be an image for deployment of some larger application. The services can be any type of executable program examples of which may include an HTTP server, a database etc. that you wish to run in a distributed environment.

In the above example, a docker service with ubuntu image is created on all the swarm nodes with 2 replicas.

docker service create : used to create a docker service in the swarm
--replicas 2 : will direct the docker engine to keep 2 replicas in the node machines
--name : flag used to instruct the name that is to be given to the service
ubuntu_test : the name given to the service followed by name flag
ubuntu : the name of the docker image that is to be used (eg: centos, nginx, php etc.).
bash : the command we wish to run in the container.

This will list the two replicates of ubuntu instances created as a result of the docker create command issued in the manager machine.

The above screenshot shows that the ubuntu image is deployed to all swarm with two replicas. This is an example to deploy swarm wide containers from master node.

For creating a high availability container in the Docker Swarm, we need to deploy a docker service to the swarm with nginx image. This can be done by using docker swarm create command as specified above.

This would create nginx container in the host machine only, as no replicas are created. Please see the screenshots below:

On the host machine:

The below screenshot shows that the three nodes are added to the swarm,

The IP of the manager node is loaded as shown in screenshot below:

The swarm node 1 IP is loaded in the browser as in the screenshot below:

The same nginx instance can be scaled to create multiple containers to setup high availability containers. Initially, to accomplish this, the created containers are removed using docker service rm command.

There are various switches that can be used along with docker service create command. One such switch is the --replicas. The replicas switch will create the replicas of the current service by the number specified along with the command, say, --replicas 3.

In this case, let us create an nginx swarm container service with 3 replicas. The nginx containers will be created all over the swarm with a load balanced, highly available containers.

The docker container with three replicas can be created using the following command:

The following screenshots shows the 3 replicas of nginx server in the manager machine and the two nodes.

The nginx container running on the master node is shown below:

See that, the container name is created as webserver.1.**, which indicates it is the first replica.

The container running on the first node is shown below;

This is the second replica of the nginx server and hence the naming webserver.2.**

The container running on the other node,

This is the third replica running on the second node. The name of the container is webserver.3.**

For editing the document root of the default webpage shown, we need to get in to the shell of the containers. To accomplish this, we can use the docker exec -it command.

To get in to the shell of the container, we need to know the container ID. This can be found out by using docker ps.

The container ID in this case is ‘aaa6e5e585e8’. To attach to this container execute docker exec -it. See below,

The above command directs docker to run the command to bash and this will display the shell of the container. Any changes to the container and nginx can be made from here.

I have made some changes in the default index.html file of both the docker containers to show the differences and illustrate the load balancing.

In the above screenshot, I have loaded the IP of the manager machine i.e. 139.59.22.239 and this displays the default page from the Docker Manager. Upon refreshing the page without changing the IP will display the content from Docker Node. Thus load balanced! 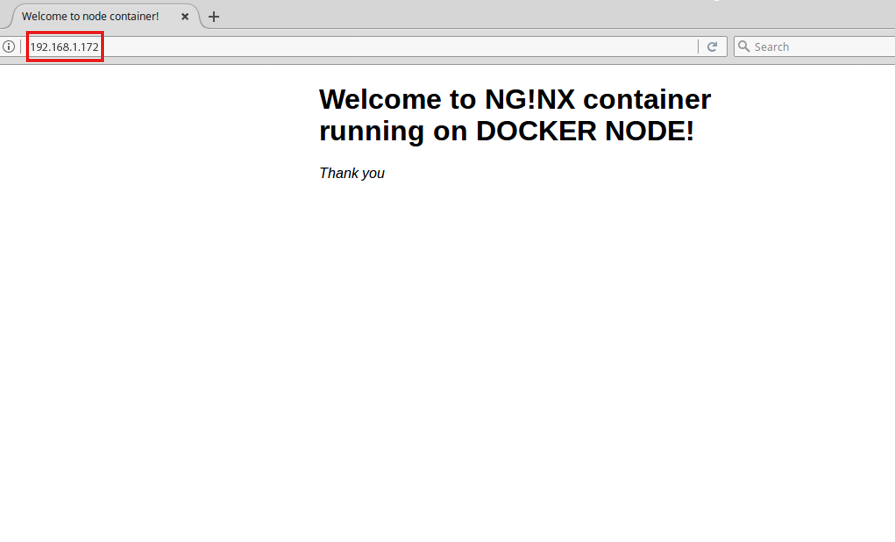 From the above screenshot, it is evident that the IP is not changed but the web page is changed per request. This is how the docker load balancing work, the load balancing is done internally by the docker engine without any extra piece of software or hardware. This is an example how a load balancing cluster can be created.

The Docker Swarm  involves less infrastructure and resources compared to other technologies used to accomplish the same type of infrastructure.

Thanks for dropping by. Ready for the next blog?

Founded in 2010, we are a team of a sysadmins with super awesome server management skills who likes to give super quality support at super affordable price.